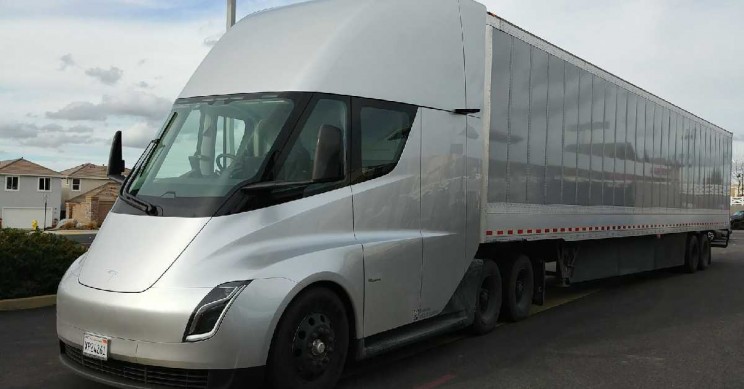 We’ve heard plenty about electric fleet cars of late, but the idea of electric trucks hasn’t been anything like as well discussed. This is strange given that one of the main drivers behind switching to electric vehicles has been to clean up our air and large trucks – ones around 4 tonnes and above – can emit up to 150 times the pollution of a standard car.

Momentum is gathering behind electric trucks though. Electric vehicle manufacturer Tesla is unveiling its electric truck on the 26th October, closer to home companies such as Royal Mail and Ocado have begun trailing electric delivery vehicles. But what are the advantages to electric lorries? And what are the practical issues that need to be overcome to make them viable alternatives to traditional engines? Well, in this latest blog from Getaquoteinsurance, the truck insurance specialists, we’ll look at this in more detail and assess the viability of electric trucks.

The range of all electric vehicles has always been the single biggest barrier to their widespread adoption and this is even more of an issue for hauliers and other forms of truck operators. Mercedes’ electric truck has a range of 124 miles which is fine for local work, but would it work for a long-haul operator, currently it seems unlikely. That could all be about to change, though. Tesla’s new model is rumoured to have a range of up to 300 miles when carrying full load of 18 tonnes. Impressive, don’t you think?

Being able to drive 300 miles is great, but what happens when you do need to stop and refuel? Unlike diesel lorries you can’t just pull in, fill up and be on your way. This has been another long-term block on electric truck usage. Until recently charging points in the UK were scarce and the time they took to charge were impractically long. That though has changed. Electric charging points are in most towns these days and there are substantial grants available to businesses to install charging points – grants of up to 75% are available from the government. Tesla’s new truck will charge in just over 5 hours, so as long as a truck is either parked in a depot or rests at a truck stop with a power source then refuelling isn’t really an issue.

You’ve probably noticed that your truck insurance quotes have gone up of late. This is in part due to the increase in insurance premium tax, partly as a result of Brexit and the devaluation of the pound and in part due to inflation. Whatever the reason it’s not good for you as a truck owner. Electric trucks should help reduce the costs of truck insurance as they are mechanically simpler and so easier to fix and are also more reliable. And, as with the Tesla, if they can be run in semi or autonomous mode then truck insurance costs will definitely come down as they could prove to be safer.

The Death Of Diesels

Since the VW emissions scandal, diesel has become the new public enemy number one and the government are determined to see the back of the fuel. They have already announced that by 2040 the UK needs to be free of diesel vehicles in order to clean up our air – so hybrid and electric trucks are inevitable – and in the Budget in November it’s almost certain the fuel duty on diesels will rise. Fuel costs are a significant burden for all truck operators and in the short to medium-term diesel is set to become even more costly.

Alongside clean air, significantly reduced mileage costs are one of the great benefits of electric vehicles. With costs per mile of around 2.3p versus 10.7p for a diesel HGV there are massive cost benefits to electrifying your truck fleet. Add to that the proposed clean zones and extra charges for entering cities like London if you have a high polluting vehicle and the savings quickly mount up.

Unlike electric cars, electric and hybrid lorries are still rare. Tesla’s entry into the market is significant and other manufacturers such as Nikola, Mercedes, GM and Ford all either have one on the market or in development. Just as we have seen an explosion in the range of cars, so it seems likely that as technology advances so we will soon see a wider choice of trucks too.

With the savings on everything from truck insurance, day-to-day running costs, the increased tax pressures on traditionally powered vehicles and their improved practicality, electric trucks look like a good option, albeit in the medium-term. In the short-term there are issues that still need to be overcome, not least in terms of the cost of the vehicles which will take a while to come into line with diesels. That will happen, and given the length of time that most companies have between lorry purchases it could well be that by the time you’re looking to buy again the situation may be rather different.

The simple truth, though, is that these vehicles are the future: they are coming and all of us need to adapt to that change and start that adaptation now in order to save money, time and disruption.